During the Middle Ages the church was a tremendous force in most aspects of people’s lives, and this can been seen in the believed sources of mental illness as well as the treatments.

A popular philosophy during this time, which had become the basic form of psychology was interactionistic dualism, where the body was believed to be governed by the soul (Brown & Menninger, 1940).

It was believed that when someone acted in accordance with the church, it was because of their God-given soul; however, if the did not, it was believed something had happened to their soul.  In addition, negative events were attributed to the devil, whereas positive events were attributed to God.  As a result of these beliefs it is not surprising any mental abnormality believed to be result of demonic possession was considered logical. 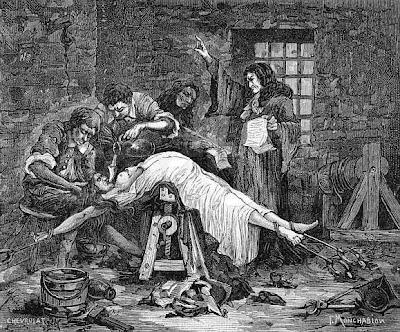 When demonic possession was believed to have occurred, the first option for removing the demon was to coax it out of the possessed person.  If this was unsuccessful, the next option would be to insult the demon out.  If insulting the demon also failed, the next form of treatment would involve making the possessed individual so uncomfortable that the demon would not want to remain there (Brown & Menninger, 1940).  It would be under these circumstances where torturous treatments such as immersion in hot water, and immersion in sulphur fumes would be used.